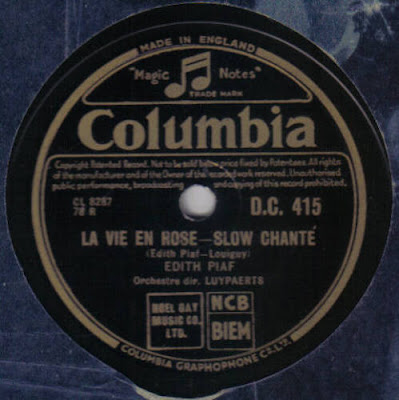 I've been asking students and friends to give me two French song titles that they are familiar with and so far these two have been the unanimous responses.

I came to know ‘La Marseillaise’ through the all-time classic black-and-white Casablanca on TV on a Sunday afternoon in my childhood, in the 1980s.

There was a scene in which the house band of a nightclub played the French national anthem with the crowd singing along in response to a group of German officers' German patriotic hymn. My father told me that was 'Masai qu' (馬賽曲 'the song of Marseille' in Mandarin).

I came across 'La Vie En Rose' much later. Although the tune is not obscure and, despite its ranking as an foreign oldie, never obsolete in Taiwan, I only learnt that the original singer is Édith Piaf during my undergraduate period in the mid 1990s.

I had for thousands of times heard but always dismissed the tune, whether sung by Piaf herself or played as an instrumental piece, until one day when I found myself bombarded with it relentlessly at a record shop for half an hour. Finally I enquired who was singing what. Hence, 'La Vie En Rose' became the second French song I have seriously known.

I've just won an auction for a 78s record of 'La Vie En Rose' but have yet to find out 'La Marseillaise'. For now, while enjoying the former with surface noise from the record, could you, dear readers, name two French songs for me?
Posted by Wei at 14:50