MetLife's advert song from the 1920s 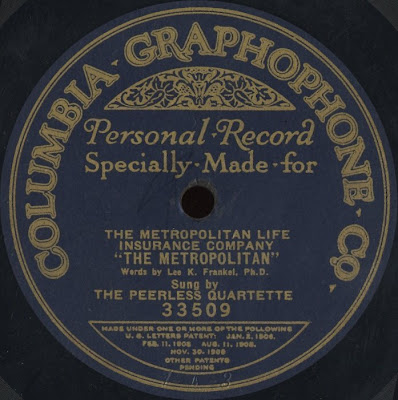 (An advert song of the Metropolitan Life Insurance Company, with lyrics written by the vice-president, sung by the Peerless Quartet, c.1920s)

Metropolitan Life Insurance Company, or MetLife for short, is 'a leading global provider of insurance, annuities and employee benefit programs, serving 90 million customers in over 60 countries' as claimed on the official website.

I acquired a record some time ago, captioned with 'Persoanl Record Specially Made for The Metropolitan Life Insurance Company', on one side of which is 'The Metropolitan' sung by the Peerless Quartette.

This male quartet is regarded as the most commercially successful vocal group of the acoustic recording era, the time before the introduction of the microphone when musicians had to play into a giant cone.

As this group was inducted into the Vocal Group Hall of Fame in 2003, it's not too difficult to find out some biographical information. However, I was really foiled when trying to explore when the record was issued, to what extent MetLife was involved in the production, as well as what the song is about.

I visited MetLife's official website and contact them at various email addresses, but was only dismissed. I suppose they might be interested in it for this song is part of MetLife's corporation history. The lyrics were written by Dr. Lee K Frankel, the vice-president of MetLife.

However, this leading global provider of insurance and blah, blah, blah didn't even have the courtesy to informed me that the enquiry had been received.

I don't know if you will receive this, but I may have some information about this song. I am a retired Officer of Metropolitan Life. This may be a song written for the Company in the early 1900's for employees to sing at conferences (not an advertising song). If it is that song, the lyrics begin: "Let us raise our voices gladly With a song from every man. Let no note be sounded sadly At the gathering of the clan."

If that is what it is, (or even not), I would be very interested in a mp3 of this song. Thanks, Anne H