A laughing song for the smiling father and son 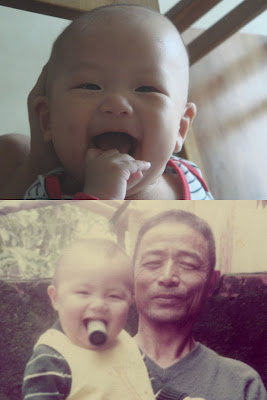 Fanne nags at me all the time for keeping a stiff upper lip too often but seldom wearing a smile, so much so that I almost believe I had been born with an attitude of determined endurance in the face of adversity, and was therefore unemotional.

Of course not true. I was able to smile, or even laugh, although I don't smile a lot today.

However, I have to say that Ronne smiles and laughs much more often than I did and do. He does, and therefore at the end of this blog entry, let me play a record of laughing song. 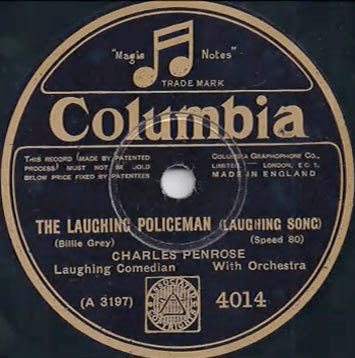 (Listen to 'The Laughing Policeman' by Charles Penrose, 1926)

This song was performed by Charles Penrose, a British music hall singer and radio comedian, who was probably best known and is still remembered today for this laughing song. In addition to the one we are listening to here, Charles had also made several recordings for this piece, of which the first was released in 1922 under Regal (G7816) and two more were Regal (G9391) in 1929 and Columbia (FB1184) in 1934.

Although, on the paper label as shown above, the song was written by Billie Grey, the pseudonym of Charles's wife, it was actually adapted from 'The Laughing Song' by George W. Johnson, who had also recorded the song for many times, of which one can be heard on this YouTube clip. George's tune inspired Charles to compose the new lyrics about the funny policeman.

Below is what Charles sings:

I know a fat old policeman
He's always on our street.
A fat and jolly red-faced man
He really is a treat.
He's too kind for a policeman
He's never known to frown.
And everybody says
He is the happiest man in town!.
(Ha ha ha ha ha ha)

He laughs upon point duty
He laughs upon his beat.
He laughs at everybody
When he's walking in the street.
He never can stop laughing
He says he's never tried.
But once he did arrest a man
And laughed until he cried!
(Ha ha ha ha ha ha)

His jolly face is wrinkled
And then he shut his eyes.
He opened his great big mouth
It was a wonderous size!
He said "I must arrest you!"
He didn't know what for.
And then he started laughing
Until he cracked his fat old jaw.
(Ha ha ha ha ha ha)

So if you chance to meet him
While walking 'round the town.
Shake him by his fat old hand
And give him half a crown.
His eyes will beam and sparkle
He'll gurgle with delight.
And then you'll start him laughing
With all his blessed might!
(Ha ha ha ha ha ha)
Posted by Wei at 13:08