Digging out old family photos on the lantern festival 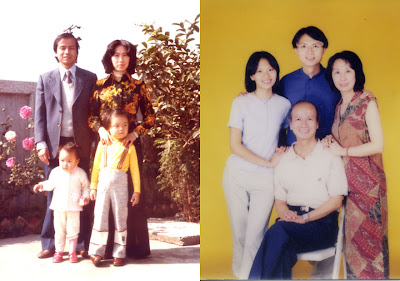 
(Listen to 'Home! Sweet Home!' by Deanna Durbin for First Love on Brunswick, 1939, especially played for these two photos. May time fly and our faces change with age, the familial ties remain steadfast.)

Yesterday was the lantern festival, which is generally regarded as the last day of the Chinese New Year and after which all lunar new year celebrations conclude. Therefore, Fanne and I, together with my son Ronne, went to dine with my parents.

I spent some time delving into an iron cabinet in my parents bedroom in search for some old photos taken in my primary school days. Tonnes of photos turned up, including those taken on my parents wedding day.

I didn't start the quest for the past out of nowhere. It all began with a primary school reunion event organised through FaceBook, which took place when I was in the National Museum of Ethnology in Osaka working with other colleagues on a discography of historical recordings made in Taiwan during the Japanese colonial period.

After the event, which unfortunately I missed out, some classmates managed to locate most members of the class through FB and Google (what an era of cyber manhunt!) and are uploading old photos to our facebook group page. Therefore, I started looking for some photos taken at primary school and happened to find some more taken when I was even younger.

When a photo (above left) shot in my grandparents' garden in 1979 appeared, another one (above right) shot in 2002 came to my mind, together with melody of 'Home! Sweet Home!' composed by the Englishman Sir Henry Bishop.
Posted by Wei at 09:31