Armstrong's smile at an unhurried pace 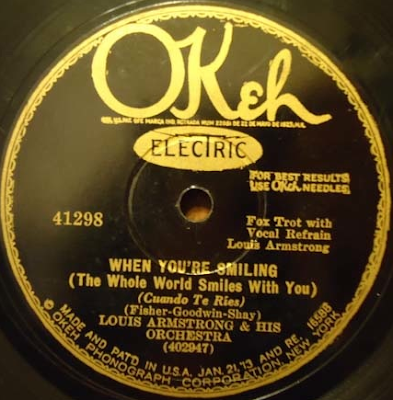 I heard Louis Armstrong's rich and sonorous voice in an iPhone 4 advert launched on the 7th of June last year—'When you're smiling, when you're smiling...' Somehow, I became besotted with the tune and it has lingered in my mind since.

During the Chinese new year, I stumbled upon a 78s record of 'When You're Smiling' made by Armstrong and his orchestra in 1929 on eBay. I won the bid with an unflinching determination to procure it at all costs. Interestingly, it is faster than what I heard in the advert; it's a different version.

As I'm sure the record is played correctly at 78 rpm and the 1929 version is the first one he had recorded for this piece, apparently, he slows down when recording again at a later stage.

Well, the elderly slow down both mentally and physically, partly because of the accumulation of biological changes over time and partly, I believe, owing to the way in which they view the world. The latter may apply to the interpretation of a musical work by a musician in the later stage of life.

Here is another example.

In 1955 the Canadian pianist Glenn Gould launched his career, as well as made his everlasting name over the classical world, by recording his debut album of J S Bach's Goldberg Variations (BWV 988). In 1981, the year before closed his piano lid permanently, he made another recording of this keyboard work.

Whereas in the debut album Gould plays at an unbelievable extreme tempo, in the valedictory recording he slows down, a lot.

Just like Gould, Armstrong slows down as well in the later version. I suppose both the pianist and the trumpeter held back to see a different world in music.

As I don't have the later version of Armstrong's 'When You Smile', watch the video clip of the iPhone 4 advert, where you can hear how the celebrated jazz maestro smiled at an unhurried pace.