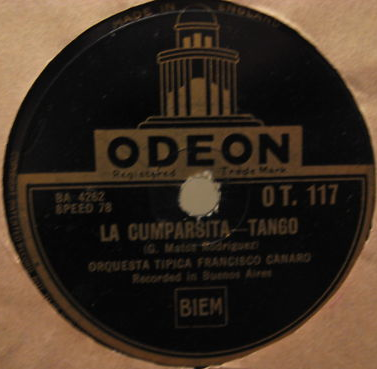 (Listen to 'La Cumparsita', the most recognisable tango, by Orquesta Típica Francisco Canaro, 1933)

Tango, particularly the Argentine tango rather than the international standard ballroom one, has recently been very popular in Taiwan. In addition to dance, enthusiasts adore the strong rhythmic pulsation and engaging melodic lines filled with a nostalgic sentiment delivered by the bandoneón in music. They discern musical and choreographic differences between Argentine and ballroom tango; they hold the former in high esteem and deem it authentic.

However, most people may not realise that both the two metropolises on Río de la Plata Buenos Aires and Montevideo, capitals of Argentina and Uruguay respectively, contributed a lot to the development of the dance and music, although the former somehow, in the end, dominated the scene and became known to the world as 'city of tango'.

'La Cumparsita', the most recognisable tango piece, if not any less than 'Por Una Cabeza', and thus almost synonymous with tango, was actually an instrumental work written by the Uruguayan composer and journalist Gerardo Matos Rodríguez in 1917. In the 1920s, 'La Cumparsita' arrived in Paris, from which it spread to the world to become a synonym for tango.

In 1997, eighty years after its birth, it was made Himno Cultural Y Popular ('cultural and popular anthem') of Uruguay by law.

The audio clip here is from a gramophone record I have recently won from eBay, recorded in 1933 by Francisco Canaro with his Orquesta Típica (a tango orchestra consisting of a string, a bandoneón and a rhythmic sections), who in 1925 arrived in Paris where tango was the new fashion and met the composer there.
Posted by Wei at 14:30