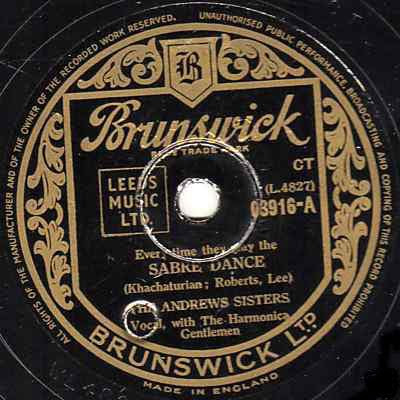 (Listen to the vocal 'Sabre Dance'!)

'The Sabre Dance' is actually a movement in the final act of Gayane, a ballet in 4 acts with music written in 1942 by the Armenian composer Aram Khachaturian, in which male dancers display perform a war dance with sabres in their hands.

I suppose most people would be able to recognise this piece by the chromatic and gliding notes in the melody, as well as the stirring rhythmic pulsation, even though they cannot really name it.

This orchestral work later become a popular concert piece in its own right. However, no until recently, after discovering a 78s record from eBay, have I realised that there are actually a series of adaptations by various pop singers and rockers.

I finally won the bid for that record—a vocal version of 'The Sabre Dance' by The Andrews Sisters, a renowned close harmony trio active from the swing up to the 1960s, to the accompaniment of three harmonicas by The Harmonica Gentlemen. 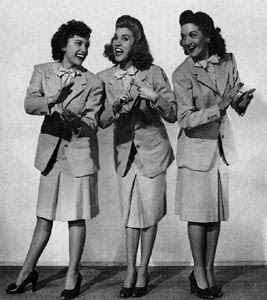 Having been bidding for 78s records on eBay since September, I not only found some software for the hardware, my HMV 101 and 103, but also lead myself to a world of the sounds which have long faded into oblivion.
Posted by Wei at 17:45