A must for the family, or for myself? 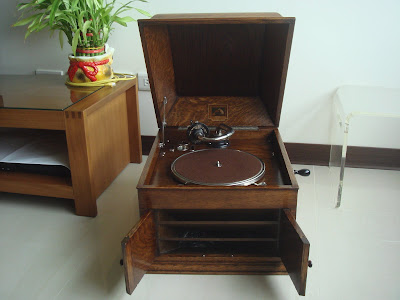 According to the built-in New Oxford American Dictionary provided by the Apple operation system Mac OS X 10.4, a toy can be

1) an object for a child to play with, typically a model or miniature replica of something, or

2) an object, especially a gadget or machine, regarded as providing amusement for an adult.

In a recent case of myself, definition 2) applies.

After buying myself an HMV 101 portable in early September, I was induced by Davide Lin to believe that a table top gramophone is also a must for every family (this sounds like words in advertising!), apart from a portable one. As a result, I bid again on eBay and won another 'toy'—an HMV 103 table top.

After my son Ronne was born, both my wife and I reserve Sundays for the family and, except for housework, we don't work, so we can he can play with us (or actually he can play us!). However, now I also reserve Sundays as gramophone days and Ronne has to sit beside me watching the funny black stuff turning round and round, and listening to the sound delivered from the magic wooden box.

In this society, where at the one end people would expend millions seeking hi-end Hi-Fi stereo system, and at the other people would listen to poor-quality downloaded illegal audio files, it may be a good idea to take my son back to the 1930s, 1940s and 1950s, when advanced digital recording and playback technology were not available, but humanity and musicality were most important when making sound productions.
Posted by Wei at 14:16