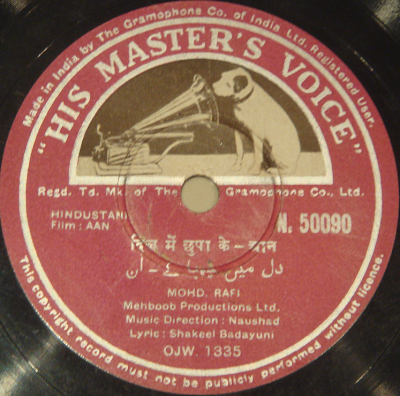 (Paper label of one of the Bollywood records I bought, with the song title Dil me chupa ke)

I'm so glad that the two 78s records I bought from eBay arrived today, just before the weekend and very much earlier than I expected. The seller, based in India, stated on his eBay page that international delivery would usually take 20 days, but the records came in 10 days.

They are definitely going to be the focus of the micro-soundscape in the Chen family this weekend.

The four songs on the two records I received today are from Aan (आन, pride), a Hindi musical film which features an acclaimed soundtrack of ten songs. Among these four my favourite is 'Dil me chupa ke' (roughly translated as 'Hidden in my heart') sung by the famous playback singer Mohammed Rafi.

Listen to it; it's absolutely fantabulous. It really made my day. 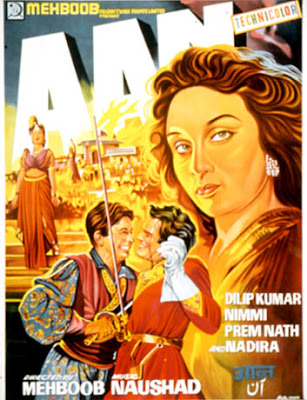 For those who are interested in what the song is actually about, please refer to the transliterated lyrics and translation, quoted as in Desi Film & Music - Bollywood Songs Lyrics.


Dil Mein Chupake Pyar ka Toofan le Chale
Keeping it secret in my heart, I am carrying the storms of my love

Dil mein Chupake Pyar ka Toofan Le Chale
Hidden in my heart, I am carrying the storms of love

Ulfat ki raah mein
in the pathways of love

Kismat ke Khel ka
for the games played by destiny

Meheman le Chale
am Taking that visitor along