A bagpipe on the bottle of ale from Café Bastille 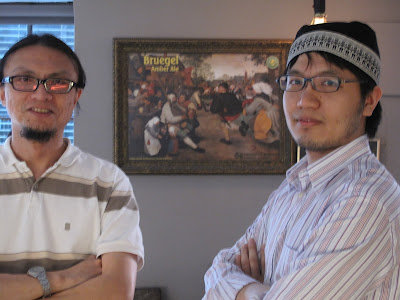 Yesterday afternoon, in business hours, my teaching assistant and I went to Café Bastille, a bistro which serves food and a wide range of Belgium beer, near National Taiwan Normal University. Certainly we were there for a bottle (unfortunately not a 'pint', as beer is not sold in pints in Taiwan); however, we were actually on a mission (i.e. serious business) and thus we deserved a bottle.

Look at the painting behind us. Not clear enough? Then look at the one below. 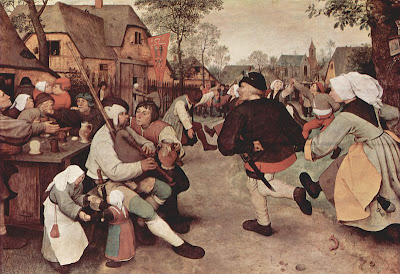 In order to have a good start and grab students' attention right away, I always show a painting that carries some 'music' (music instruments, most of the time) every week at the beginning of my 'Musical Cultures Around the Globe' class.

The artwork for the this week's course 'Europe' is The Peasant Dance by the famous Netherlandish Renaissance painter Pieter Bruegel, in which it requires some efforts to discover the 'music'—a bagpipe at the centre left on the canvas. This Flemish bagpipe, called doedelzak or pijpzak in Dutch, has two single-reed drones which face directly up when played. 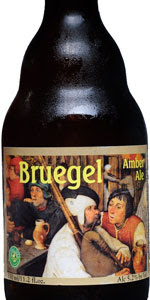 Still not clear enough? Then look at the bottle of Brugel Amber Ale on which is the male character who plays the bagpipe in Brugel's painting.

I just want to emphasise to the students that there are indeed various types of bagpipes in Europe and the Scottish great Highland bagpipe, to which most people are familiar, is just one of them.Therefore, we went to Café Bastille to take a photo for us and the replica painting, as well as to have some ale so that we can take away the bottle and show it in class.

What a good afternoon—working while making merry in business hours.
Posted by Wei at 00:15