Is my son a weirdo or is it just the magic power of Arabic music? 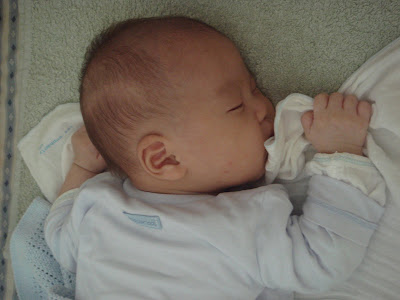 My son Ronne turns two months old today and he has managed to sleep through the night for several days. He goes to bed at 22.00 and wakes up at 06.00 next day, which means a full night of uninterrupted sleep for Fanne and me.

According to National Sleep Foundation:

For newborns, sleep during the early months occurs around the clock and the sleep-wake cycle interacts with the need to be fed, changed and nurtured.

By six months of age, nighttime feedings are usually not necessary and many infants sleep through the night; 70-80 percent will do so by nine months of age.

Hence, I believe Ronne is a bit ahead of the timetable, which is a bit weird.

As the saying goes, 'like father, like son'; I am a weirdo, so is Ronne. However, I somehow believe it may have something to do with the Arabic music I have been playing throughout Fanne's pregnancy, labour and delivery, and since Ronne's birth.

Perhaps there is certain mysterious power in Arabo-Andalusian classical music, which imbues peace and tranquility from all around our home.

Nevertheless, it is really unusual that a two-month-old baby sleeps through the night without the need to be fed before the dawn. 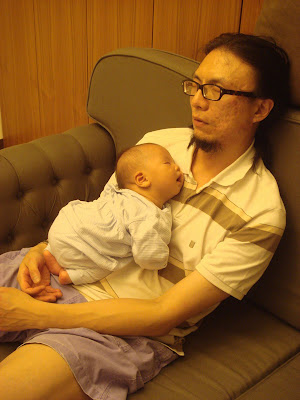 (Father and son, both asleep, just like how the father would fall asleep anytime, anywhere)
Posted by Wei at 11:19