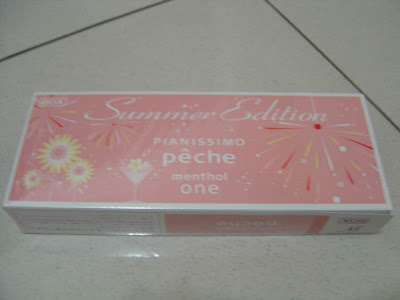 (What would you think it is should I haven't told you it's a carton of ciggies?)

I stopped smoking on Chinese New Year when the last cigarette was burnt out, because I couldn't be bothered to buy more in the wee small hours of the morning. I was tired of have any more puff and just stopped. However, as I have said stop for now ≠ quit for good. I started again last Monday because I received from May a carton of my favourite Pianissimo Pêche Menthol One.

Acclaimed as a successful 'D-spec' (less-smoke-smell) product, the 1-miligram-tar and menthol Pianissimo Pêche Menthol One was originally developed for the Japanese domestic market, with an odour-reducing technology, by Japan Tobcco Inc., the third largest international manufacturer of tobacco products in the world. It was first launched in July 2005 in the test market, Miyagi (宮城) and Yamagata (山形) prefectures, and then introduced nationwide in October 2005.

I came to know Pianissimo Pêche Menthol One through a Japanese rock band Alice Nine (アリス九號). It's the favourite brand of the band's bassist Saga (沙我). I'm not particularly interested in Japanese 'Visual Kei' (ヴィジュアル系) groups, but somehow I discovered Alice Nine by chance.

Pianissimo Pêche Menthol One is not available in Taiwan, although other products of Japan Tobacco such as Mild Seven, Salem and Camel, have been on sale for ages here. Hence, I have to ask people to ship in for me.

Receiving my request through the international text sent to her mobile, Fanne bought me a carton of 200 cigarettes last year in the duty-free shop in Hong Kong Airport last summer. This summer I was given another carton, the special summer edition.

Apart from the pretty exterior carton, the packs inside come in three different designs featuring various items such as sunflowers, a straw hat, a glass of cocktail, sun chaises and fireworks. They really look like perfume cartons.

Thanks, May. They are so cute! 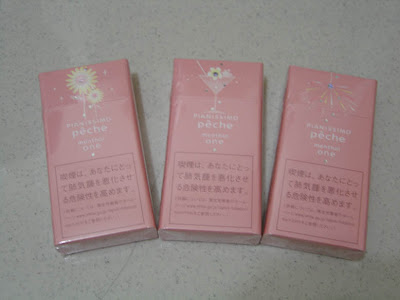 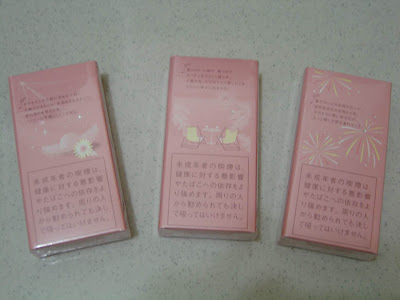 (back view of packs)

Don't mention it, Wei.
I didn't expect the special design when I bought them. The only thing I feel is "hmm....sissy...". :)
Have you tried the Japanese domestic packs ?