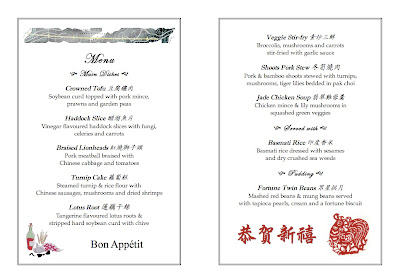 Having celebrated Chinese New Year abroad for five consecutive years, I am now back in my homeland spending this traditional holiday with my parents and wife.

I left Taiwan in autumn 2002 to present those 30s and 40s Shanghai popular songs to the academic world, and from 2003 onwards I didn't have 'reunion dinner' (團圓飯 tuanyuan fan) with my parents until this year.At each dinner in the last three years, in order to keep all the guests informed of what they would consume as well as to brighten up the table, I prepared home-made menu cards with, apart from food details, Chinese artwork featuring the zodiac animal of the year. 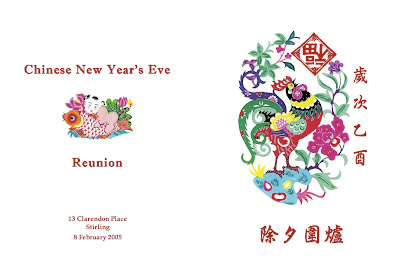 (Front and back of the menu)

I still keep all these cards. Images given in this entry are from the menu for 2005, the year of the rooster.

A Chinese saying goes, 'Whether loaded or penniless, marry a wife to enjoy new year (有錢沒錢, 討個老婆好過年 youqian meiqian, tao ge laopo hao guo nian).' I'm still un-full-time-employed, and hence in one sense penniless, but I do have a wife, a dutiful and loving wife (although she failed to follow the minister and made a mistake by saying 'beautiful and lovely wife' when pledging her troth in our wedding).

I'm so glad I don't have to design a menu and put it into practice on my own in the year of the rat, but I do wish in the near future I can be the host again for those who supported me in all aspects of life in Stirling.
Posted by Wei at 17:42