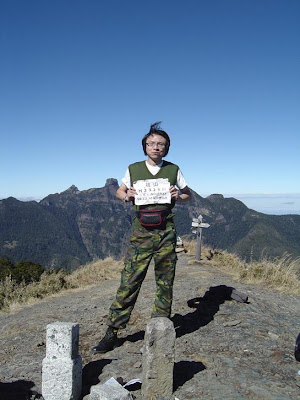 As time goes by, we've already moved into February. I really should have uploaded this picture. I reached the summit of Mt Tao (Taoshan 桃山, literally 'Mt Peach', nothing to do with Taoism) in January, but somehow, I just couldn't bother to transfer the picture from the camera to my laptop until today.

Two weeks ago I joined NTU Botany Class '98 (I graduated in 1997, so they were my 'junior department mates') to have a weekend hiking break in the Wuling Farm (Wuling nongchang 武陵農場). As Mt Tao, numbered 44 among the so-called 'Hundred Peaks of Taiwan' (Taiwan baiyue 台灣百岳), is in close proximity to the farm, nine of us planned to climb the peak while the other nine members of the group rambled in the vicinity of the trailhead.

(Follow the link and scroll down a bit for a brief introduction about mountain ranges in Taiwan.)

In the end only two reached the summit and I was one of them.

The last time I climbed up a mountain in Taiwan and reached the summit was on a day out with Botany Class '97 to Jiufen (九份 literally 'nine portions') in 1993. That was Mt Keelung (Jilongshan 基隆山), actually just a hill (588 m or 1.929 ft).

As I've never been regarded as manly, athletic since my childhood nor am I really a sporty, outdoor type, I had no idea if others in the group were impressed by my achievement, but I was quite sure my wife Fanne wasn't at all. She knows it all the time that I'm mentally tough enough to endure hardship and pain, and thus sometimes so self-assertive that once I set a goal, I must attain the goal.

There is apparently a huge difference in elevation between Mt Tao and Mt Keelung. However, I don't think I have become any physically fitter or sturdier over the years so that I am in place for mountain challenges. I owed my gratitude to those team members who carried cooking kits, water and food. Without their support, I wouldn't have been able to reach the summit.
Posted by Wei at 16:00

Nice pic! What did the note that you are holding say? I can't read it from the pic.

I saw the other photos from your trip to Wuling Farm, looks like you guys had a lot of fun.