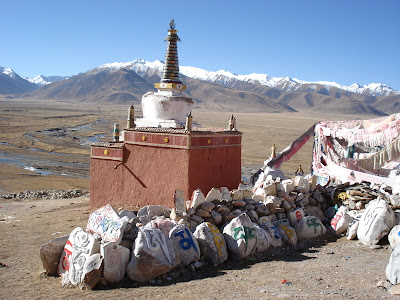 (image from Life on the Tibetan Plateau)

I've just had a meeting with the producer and other supervisory personnel of the Angkor Wat film team. In their point of view, my proposed piece feels so contemporary. Although it has a good balance in all registers of sounds and can surely be used in their future plan, on this occasion they would like something that bears certain religious mark, has a touch of history and creates a mysterious atmosphere. Well, I now present a different version, with the same backdrop, the alternate C and B-flat chords, but with the more sonorous tone of string basses and the haunting voices of a choir.

May, the first one to listen to this redone version, commented that she heard monks droning and eagles screeching and it felt as if the Angkor Wat had been moved to the Tibetan Plateau. She wondered if I should treat the Angkor Wat soundtrack in such an epic manner.

Does this reworked one carry any epic or probably post-apocalyptic atmosphere?