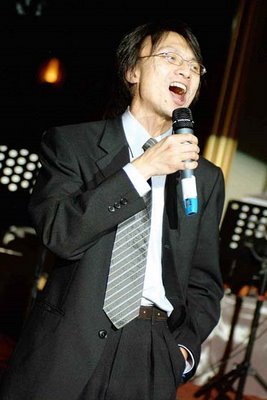 I can't believe it; this weblog hasn't been updated for a year. It's almost the end of January 2007, but the last entry was posted in 2006.

My desire to keep this weblog up with the ever-changing world has long been replaced by the desire to forget the fact that I simply cannot keep it up before emancipating myself from the slough of the esoteric doctoral study. Last Christmas when I panicked over the poor quality of written English in the draft of my thesis, as well as the endless musicological analysis of those immortal 1930s and 1940s oldies, I found my 18-year obsession with keeping a diary cured. Maybe it's just an excuse to exonerate myself from this admirable yet stubborn and time-consuming habit; nevertheless, it implies how serious the situation was: I was about to fail and therefore not a single minute should be spared for the diary, but rather every second should be spent on the bloody thesis.

However, as I was requested to sing a Spanish love song at my sister-in-law's engagement reception (I suppose that a guy must be insane if he dare reject such an 'invitation' from his in-laws), I had no alternative but to knock my socks off to present a show in front of 200 guests. It did take some time, because no one would afford to hire a cabaret band to accompany my solo and therefore I had to made a karaoke soundtrack for myself. Fortunately, because the song I planned to sing, Aquellos Ojos Verdes (Those green eyes), was so familiar that I could even belt it out when sleepwalking at a snowy night, it took only two hours to produce the accompanying soundtrack.

(Listen to the home-made karaoke!)


(And browse the lysics if you read Spanish. I'm sure that Pedro would be more than happy to translate it into English!)

Although the sister-in-law and her husband-to-be told me that no one would notice if I blundered, I insisted that as a matter of 'performance', it had to be perfect. I happened to know that the godmother of the bridegroom-to-be was the wife of a military attaché of la Embajada de la República de China en la República del Paraguay, which made me really nervous. Thanks be to god; all went well at the reception. This lady who spoke perfect Spanish approached me aferwards and said that the music was great and every syllable poured out of my lips was perfect.

On the 23rd of December 2006, I had my first-ever life experience – sing a Spanish song in public, and it was successful.
Posted by Wei at 23:49

Hi Wei, you look in good shape mate. Great to know about your karaoke moment.