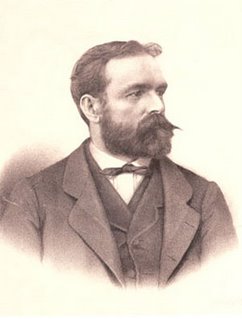 When talking about organ music, while most people would think of the great composer Bach and a colossal ghastly gothic cathedral, some might remember Saint-Saëns' large spectacle Symphony No.3 in c minor, Op.78 Organ. Yet, few would know that there is an unfamiliar Liechtensteinian composer, Josef Gabriel Rheinberger, who was appointed as the organist at the Vaduz Parish Church at the age of only seven years and whose first composition was performed the following year.

As I'm going to have a church wedding on the 23rd of June at the 600-year-old Church of the Holy Rude, where James VI of Scotland, and later James I of England, was crowned on 29 July 1567, and our organist and music director Dr John Burnett would play for me whatever I choose, I've decided this morning that I'll have the third movement Scherzoso of Rheinberger's organ sonata No. 8 in E Minor, Op. 132, to conclude the wedding ceremony.

Why? I don't really know. Perhaps I just fancy something like the black comedy The Addams Family, but not too farcical.

Anyway, Rheinberger is really a great composer. His twenty organ sonatas are praised in the Grove's Dictionary

...the most valuable addition to organ music since the time of Mendelssohn. They are characterized by a happy blending of the modern romantic spirit with masterly counterpoint and dignified organ style.

I know it may be illegal to distribute a copyrighted audio track online, but I just want you to have a wee taste. Listen to this interesting yet awesome work.

It's just a low-fidelity and incomplete sound clip, and if you really like this work, you can buy the CD.
Posted by Wei at 08:23