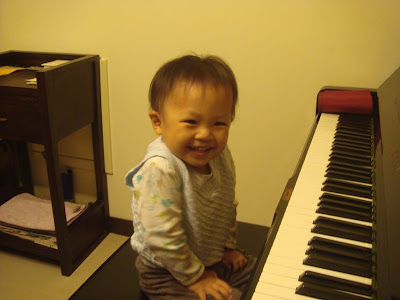 (Ready to play the piano for Dad?)

With the ever-increasing popularity of computers and our dependency on these machines, more and more people can touch-type, i.e. to type with all fingers and at least one of the thumbs without looking at the keyboard. Nevertheless, some would prefer two-fingered typing to touch typing and they still type proficiently.

Two-fingered typing is one thing; two-fingered piano playing is quite another, although both activities are carried out on a keyboard. Whereas we don't usually press several keys of a computer keyboard at the same time, except when using special keys to modify normal actions of other keys, such as
Posted by Wei at 18:06