Toy handbells for pleasure or campanology? 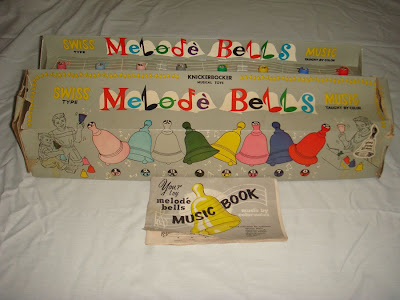 Campanology (formed by Latin 'bell' campana and English suffix -ology) is a word which designate the knowledge and study of manufacturing, tuning and ringing bells. Somehow, I was told when I lived in Britain that campanology is a pretentious term to and thus loathed by serious bell-ringers, particularly those who consider ringing primarily a service to the church.

I don't expect my son to become a professional ringer or campanologist; he can decide later by himself. Nevertheless, I think it's good fun and musical exercise, especially in this day and age when most young children spend too much time on playing video game and surfing the internet, to play handbells so I bought a vintage toy handbell set made in 1954 from TimeWarp Vintage Toys (not very pleasant experience —they charged me 35 US dollars for postage while the actual cost was only 20) for my son. 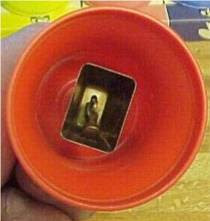 There are eight plastic bells, each of which comes in a different colour with a real metal bell inside to produce different pitches, which encompass an octave . This toy set was approved by educators and endorsed by Ding Dong School, an daily educational TV programme produced for pre-school children in the 1950s. An illustration of a bell with DING DONG SCHOOL on it is placed at the right side of the outer box.

(Watch streaming video of several complete broadcasts on the contribute website of this old-time children's TV show to have an idea what sort of programme it is, if you fancy.)

As I suppose an 18-month-old toddler is obviously too young to ring bells in an organised manner to produce a 'tune' (don't ask me if a music prodigy, such as Mozart, can do it; I don't know either), I would reserve them as a gift for his second, or probably third, birthday.
Posted by Wei at 11:52