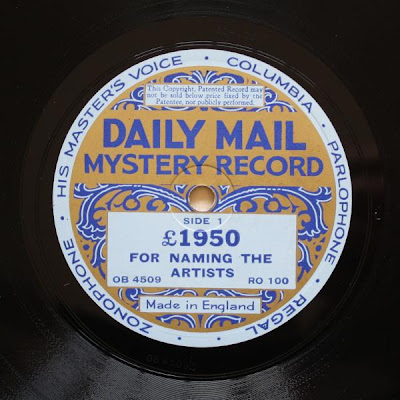 The 2011 autumn semester is commencing. I shall write down something special to mark the arrival of the new semester from which my full-time job terminated. As life indeed has so many turns and is full of mysteries, I deem a 'Mystery Record', which I've just received yesterday, to be appropriate for this occasion.

Daily Mail, a British national daily tabloid established in 1896, once organised a 'voice recognising' competition in late 1932. In collaboration with EMI, which had just been formed in 1931 by the merger of two big companies–the Columbia Graphophone Company and the Gramophone Company–Daily Mail issued a 'Mystery Record'.

This record was actually a compilation of recordings released previously on labels of HMV, Columbia, Parlophone, Regal and Zonophone, all of which were then owned by EMI. Daily Mail offered a prize of 1,950 Pound Sterling for any reader who could correctly guess the identity of the more than two dozen artists on this record. The winner would be awarded in January 1933.

Apart from the super-mega prize provided by the tabloid newspaper, what really amazes me is how the producer/engineer pieced together all the audio clips. There was no tape editing, no digital audio workstation, but how they managed to compile such a record?

I couldn't even name a single person on this record. How many can you?
Posted by Wei at 15:29