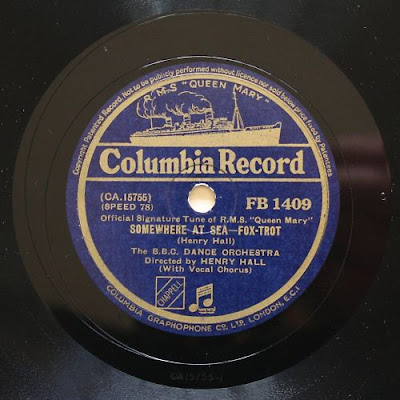 Although this recording may sound like an ordinary piece by a 1930s British dance band, a typical jolly cheerful one, there is indeed something special.

The recording was made in London in May 1936 by the BBC Dance Orchestra directed by Henry Hall, with vocal by Dan Donovan. It is the official signature tune of RMS Queen Mary and Henry Hall is the director of the dance orchestra aboard this ocean liner.

Comparing to other ordinary Columbia records pressed in Britain, this one bears a special label designed to commemorate the ship's maiden voyage on 27th May 1936, sailing from Southampton to New York.

Queen Mary was retired from service in 1967 and is now a tourist attraction with restaurants, a museum and a hotel, mooring permanently at the port of Long Beach in California.

I have yet to convert the 78s record to the digital format. Therefore, watch the YouTube clip below to listen to a fantastically remixed version this piece while screening some images onboard.