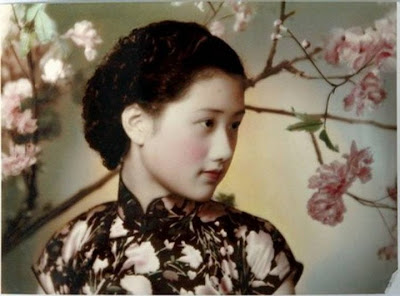 (Zhou Xuan at her late teens, image from this site)

Zhou Xuan (周璇), one of the greatest and most popular Chinese singer and actress in modern times, whose life accounts need not be reiterated here but can be read on Wiki, IMDb or many other websites through Google, once made a recording of 'Polly Wolly Doodle' with Chinese lyrics in 1935—'Roses blooming everywhere' (Qiangwei chuchu kai 薔薇處處開).

The Chinese lyrics were newly written and had nothing to do with the original lyrics published in 1880 nor the lyrics Shirley Temple sang in the 1935 film The Littlest Rebel.

Although there had been several recordings of 'Polly Wolly Doodle' made in and before the 1930s, such as Vernon Dalhart's 1929 version (Victor V-40132A), I believe Shirley's performance in the film would be an interesting one to be compared with the Chinese version.

While the Chinese singer-actress recorded 'Roses blooming everywhere' at her 17, Shirley starred in the film at 7 years old. I can't find a recording made by Shirley and don't even know if there was an original soundtrack ever released, but fortunately an enthusiastic YouTube user has made a video clip with the song against a photo.

Which version do you prefer, the late teenager Zhou Xuan's innocent voice in her 78 rpm single or the cherub Shirley Temple's naive interpretation in the film?
Posted by Wei at 15:50

Not sure about the singing but what a beautiful lady...

If you like Zhou Xuan, I posted another nice 78rpm recording on my blog, you can listen to it here : http://ceintsdebakelite.wordpress.com/2011/08/28/zhou-xuan/
Greetings

Thank you ceintsdebakelite for sharing your blog entry with me. If you like Zhou Xuan's vocal works, you can find at least 150 songs reissued on CDs by EMI (Hong Kong) or EMI (Malaysia). I have collected a lot of 78 rpm records released by EMI in the 1930s and 1940s, but as they are becoming more and more expensive, I find it more affordable to resort to CDs.