A sonic watercolour of Brazilian scenery 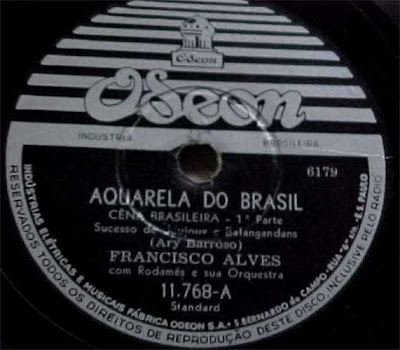 (Listen to the first recording of 'Aquarela do Brasil' performed by Francisco Alves to the accompaniment of Radamés Gnattali & His Orchestra, on Odeon, 1939)

'Aquarela do Brasil' ('watercolour of Brazil' in English) is probably the popular song that is representative of and associated with Brazil the most.

I have heard plenty of recordings of this all-time classic piece since my childhood, including Frank Sinatra's English cover, Antonio Carlos Jobim's bossa nova-ish interpretation, Geoff Muldaur's and Kate Bush's renditions in the 1985 black comedy filmBrazil, and, lastly my favourite fantastic a cappella version by Trio Esperança.

However, not until yesterday when I purchased this record had I come to know that 'Aquarela do Brasil' was first recorded in 1939, the same year it was written by Ary Barroso and some time after its unsuccessful first public performance in a musical.

Although once criticised as compliments to the dictatorship of Getúlio Vargas, probably because of its nationalistic lyrics, this song does show the songwriter's admiration for the beauty and musical culture of the country.

Refer to this page for the Portugese lyrics and English translation, and enjoy the 70-year-old recording.
Posted by Wei at 10:14