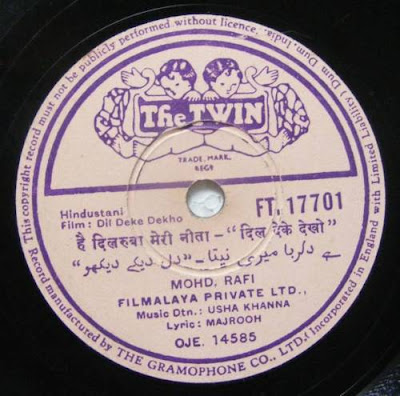 There are always surprises in the world of gramophone records, particularly when one makes a purchase in a lucky-dip fashion.

I grabbed one more Indian film music record at a half-price sale on eBay, just because the label design caught my eyes. Actually, I happen to know that this romantic comedy Dil Deke Dekho was a smash hit in 1959 although I haven't watched it and hence have no idea how the music would sound like.

I was thrilled and absolutely amused to the core when I heard side A. Blimey, it's the Indian cover of Paul Anka's 1957 chart-buster 'Diana', the song which brought him instant stardom.

However, I'm a bit confused as well. Although the tune of 'Hai ho dilruba meri neeta' was definitely adapted from 'Diana', which had been written by Paul Anka himself less than two years ago, on the paper label of this Indian record, the composition was incredibly credited to an Indian music director Usha Khanna.

How could it happen?

Whereas Paul Anka's 1957 recording was released by ABC Records, a label owned by ABC-Paramount (the present-day American Broadcasting Company), this Indian film song was issued in 1959 on The Twin label, owned by the England-based Gramophone Co (EMI).

'Diana' has reportedly sold over 9 million copies, hitting No.1 on U.S. Billboard R&B Singles Chart and reaching No.1 on UK Singles Chart, but I wonder whether this song has ever reached the company building of EMI, whether any A&R staff member, factory technician, sales manager, or cleaning lady, whatever, in EMI had ever heard this UK No.1 hit.

How Usha Khanna was accredited with being the composer of the tune? I suppose ABC Records, as a company which was both physically and mentally too far from South Asia, had absolutely no interest in Hindi Cinema and therefore has never been aware of the situation to claim its copyright over this song.

Despite the historical trivia, I really got a kick out of listening to this Indian version 'Diana'.
Posted by Wei at 14:11

Intrestingly, the first version I ever heard of this tune *was* the Hindi one by M. Rafi. Years later, I was astonished to learn that there was an English version called "Diana".