A tango at a tango bar 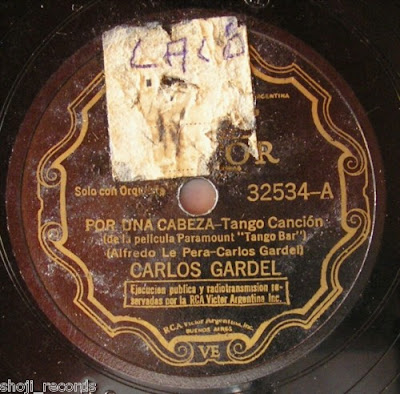 There are several definitions of the word bar to be used as a noun. Looking it up in a dictionary, you would probably find the first several to be 'a long rod or evenly shaped piece of solid substance', 'a regular narrow block of sold material' and 'a band of colour or light'.

One or two items further, there comes something like 'a counter or place across which beverages are served'. Right, that's where you intoxicate yourself and get tipsy, tight or, in the end, blotto.

However, there are some other types of bars where alcohol is not the main option. For example, whereas a juice bar serves prepared juice beverages, an oyster bar features fresh oysters, which are usually shucked on site within sight of the customers.

There is also a kind of bar which I've never come across so far—a tango bar. I can't imaging what else people can do in a tango bar besides tangoing.

Well, it's actually a Spanish-language film shot in 1935, with Carlos Gardel, the legendary tango singer-songwriter, playing the protagonist. It's where 'Por una cabeza', the second-most recognisable tango tune, after 'La Cumparsita', is from.

Tango Bar was acclaimed in newspapers as 'Un drama de pasion y aventuras, realzado por la música y canciones sin par' (something like 'A drama of passion and adventure, heightened by music and songs without the parallel', I suppose). It's definitely worth watching; I shall grab a DVD.

This 78s record arrived two weeks ago. Let's enjoy the original song delivered by Gardel himself, after having been bombarded with the instrumental versions in so many Hollywood films such as Scent of a Woman, True Lies and Schindler's List and so on.

For lyrics and English translation, please refer to The Tango Lyrics Page.
Posted by Wei at 17:07