Cooked breakfast on a Sunday morning 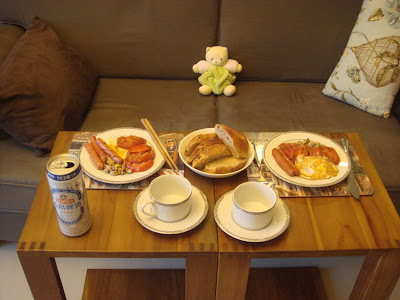 Tourists from the Continent or East Asian countries may complain that British cuisine lacks refined and heavenly specialities, but they have to admit that breakfast is absolutely an exception.

The full British breakfast features a range of cooked food such as bacon, sausages, eggs, mushrooms, baked beans, and fried tomatoes, to name a few. And the list may go on.

No wonder William Somerset Maugham, an English playwright and novelist active in the 1910s to 1930s, claimed English breakfast to be the best meal of the day and recommended serving it three times a day.

Believe it or not, I I used to prepare full cooked British breakfast from scratch for myself everyday, except those days when I had hangovers. Yes, for five years. Apart from those basic ingredients, especially the most important baked beans, I usually had one more extra dish—an omelette filled with cheese, mushrooms and finely chopped spring onions.

However, although I still cook breakfast after returning to Taiwan, I seldom have so much in the morning. Most of the time the only cooked bit is just a fried egg.

Today, waken up by the radiant sunshine and bloody chirruping birds at five on a Sunday morning, I decided to go to the food market at seven, much earlier than usual, and then have a quick, compact version of cooked breakfast—grilled tomatoes, fried sausages, sautéed mushrooms and fried eggs, served with some toasted baguette slices.

Though not as extravagant as what I had when studying in Britain, it's really a surprise for my wife Fanne. It's not too bad to have a long lie-in and then wake up to a meal ready to eat on a Sunday morning, isn't it?
Posted by Wei at 19:37