Mama... I want a boyfriend 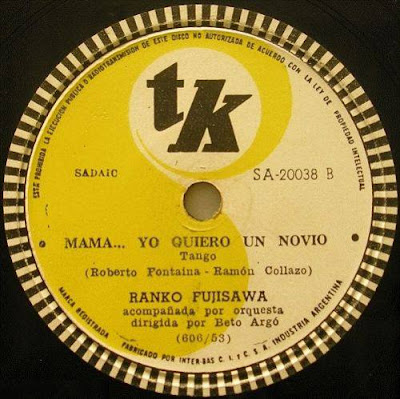 In my opinion, the Japanese people are a very diligent and fussy people in the world. Once they start working on something that originates from another country, they work really hard so much so that they become the second best, if not the authority, in the world.

Listen to the audio clip. Would you observe that the singer is actually Japanese if I didn't tell you so?

I found this record on eBay when searching for some Carlos Gardel's tango records. The song title 'Mama... yo quiero un novio' (Mama... I want a boyfriend) caught my attention first. After I saw the fourth line on the paper label, I clicked the 'Buy It Now' button straightaway without any hesitation.

Wow, a Japanese vocalist's performance of tango produced by a Argentine record company! I just feel compulsory to own this record.

FUJISAWA Ranko (藤沢嵐子) is a Japanese singer who started her career at an American club in Tokyo after the War singing Western classical works, jazz tunes and Japanese popular songs.

Enchanted by 'La Cumparsita' played by an Argentine tango orchestra, she found Argentine tango the music she really wanted to sing and therefore turned to tangos from other genres.

In 1950, Fujisawa made her debut at the Ciro Club in Ginza with the Orquesta Típica Tokyo, conducted by her husband HATAKAWA Shinpei (早川真平). She then made her first recording in the ensuing year for Japanese Victor.

The performance was so successful that several local radio stations strove to engage her to sing in the air. She finally stayed there for two more months.

Fujisawa performed again in Argentina in 1954 and for the third time in 1956.

Truly awesome. A Japanese singer conquered the Argentinians with Argentine tangos. If I didn't see the Japanese name on the paper label of the record, I would never know that the singer is actually Japanese-born Japanese. 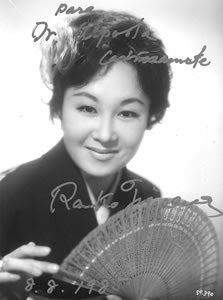 (Portrait image from MySpace)
Posted by Wei at 15:29