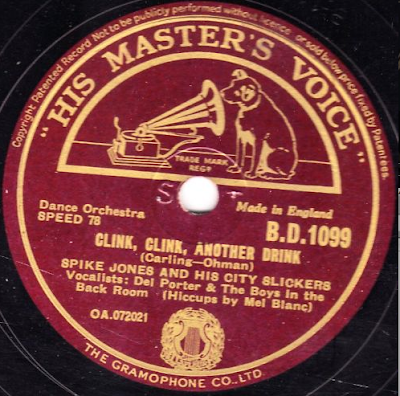 (Listen to the ‘Clink, Clink, Another Drink’ by Spike Jones and His City Slickers, 1942)

The famous British comedian Spike Jones, together with His City Slickers, produced a drinking song titled ‘Clink, Clink, Another Drink’ in 1942, with a ‘soundie’, an early version of the music video to be played in a special film jukeboxe, which is now available on YouTube.

The record of ‘Clink, Clink, Another Drink’ I purchased from eBay arrived last week. It reminds me of the round drinking culture in Britain. Although it seems to be more efficient to buy a round, as only one from a group has to leave to get some drinks rather than all of the group members queuing up in front of the bar, it makes people consume more. For example, if five chaps buy you drinks, you absolutely have to buy a round for all of them to successfully organise a piss-up.

This is why it’s so common to see a person come in for a pint but end up having probably five. Therefore, I believe that, having lived in the UK for five years, British people out-drink their European counterparts. While toddlers in the Continent are given wine with meals as soon as they are weaned, as the rumour goes, British children grow up eager to emulate the round drinking habits of their elders.

At the very end of ‘Clink, Clink, Another Drink’, it goes ‘From now on I'll stick to milk/ Nothing else to drink for me.’ To me, it doesn’t imply going teetotal; it simply means there is no more wine/spirits/beer left. Pubs close at 11 o'clock in England and Wales, or 12 o'clock in Scotland, on weekdays, so the last round has to be ordered in time or otherwise nothing left to drink.

Clink, clink, another drink
Plenty in the cellar when it's gone.
Drink, drink, the glasses clink
Making tinkly music till the dawn is breaking.

Clang, clang, who cares a dang?
What's the difference when you're on a spree?
Over the teeth, behind the gums,
Look out stomach here she comes
Hi! Have another drink on me.

Clink, clink, no more to drink
I had a cellar full, but now it’s gone.
Drink, drink, the glasses clink
Like the anvil chorus and my head is splitting,
uh, brinking, uh, busting. Oh brother!

Oh, ow, what'll I do now
Pink elephants running after me.
Oh, that stuff is smooth as silk
From now on I'll stick to milk.
Nothing else to drink for me.
Posted by Wei at 18:14