The falling green man in Stirling

I've been back in Taiwan for two weeks. Although there is certainly so much to say about the short visit to Britain, I'm just too busy, as well as too lazy, to write down everything again on my blog. How can I manage to copy to this blog everything I have recorded in my handwritten diary? Tough.

Anyway, there are still some interesting stories worthy of writing down. The first would be a pedestrian crossing signal in Stirling. Before getting to the point, I shall begin with the walking green man in Taiwan.

Like those in many cities in the world, a set of pedestrian crossing signals in Taiwan consists of two panels, showing a standing red man and a walking green man respectively.

However, instead of being a still depiction, the green walking man on the signal panel in Taiwan does walk. It is animated. The device was designed by a team led by Ms Lin Liyu (林麗玉), the then Dep Commissioner of Taipei City Dept of Transportation, in 1999.

Moreover, when the green man starts walking, the top panel becomes a countdown timer displaying the seconds remaining until the next 'stop' signal comes on. In the last 10 seconds, the green man even speeds up to remind the pedestrians to do the same.


(Note how the green man speeds up in the last 10 seconds.) 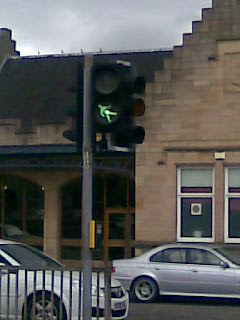 In Stirling, as in other places in Britain, a lot of crossings are equipped with ordinary 'red man/green man' signals, but the one in front of Stirling Railway Station is absolutely hilarious. The illuminated green symbol is in some way tilted and looks as if the green man is about to slip and fall over.

I believe the falling green man has been there since I went to Stirling for my doctoral study in 2002. It was there when I left for Taiwan in summer 2007 and it is still there today. It really brings to my mind the little falling man in the yellow 'slippery floor' warning sign.