I was wrong and Haägen-Dazs is never Scandinavian 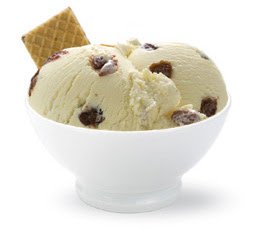 Since I met Häagen-Dazs, the ice cream, more than 20 years ago, I have held a firm belief, without conscious reasoning and supportive evidence, that it is imported from Denmark. Not until yesterday did I learn that it has actually no connection with any Scandinavian country, nor is the brand name of any Scandinavian origin.

Having not dined out for quite a while, Fanne and I invited Dad to Korean BBQ at the food court in Shin Kong Mitsukoshi (新光三越), Xinyi New Life Square (信義新天地) near Taipei 101. As it almost hit 33 °C yesterday, I proposed to have some ice cream for pudding on our way back home to finish this hot day. We then walked to the next building in the complex and gave ourselves a treat at Häagen-Dazs.

When I was busy shovelling down the classic rum raisin, Dad posed a question to us: 'Where is Häagen-Dazs from?' Because my belief of Häagen-Dazs's Danish origin was just a preconception, I could not offer my father a definite answer.

After consulting its Official Site, I realised that Häagen-Dazs is a brand of ice cream created by a Polish couple, Reuben and Rose Mattus, in The Bronx, New York in 1961, and the brand name is simply formed of two made-up words which give a Scandinavian impression.

These two invented words really piqued my curiosity and therefore I dieceded to look for some theory for product naming.

In a long forgotten textbook on advertising management, which I haven't read since I received MBA in 1999, I found 'foreign branding', an advertising/marketing strategy in which foreign or foreign-sounding names are given to a product or service to influence consumer perceptions and attitudes by evoking connotations of foreignness and its implied cachet or superiority.

That's it. It reminds me of Elvis Castillo's classic 'She'. Things may not be what they may seem inside their shells. Häagen-Dazs is not derived from any Scandinavian word, I was simply beguiled by the Polish couple who created the brand, as well as, of course, the product's super-premium quality.
Posted by Wei at 14:00

I remember shocked when I discovered this, too. Clever branding trick! Thanks very much for the full story though. That I didn't know.

I remember something else in the Kitchen-of-Bridge-of-Allan. I pigged out the whole box of ice cream you bought for me and Fanne and our flatmates after having your first leg of lamb. Lovely.