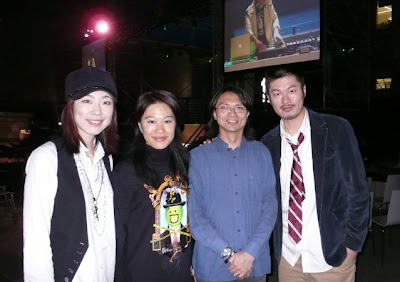 (From left, Sophia, May, me and Justin, image courtesy of May)

I once host a programme about the musics in the Far East on Subcity Radio in Scotland in 2006. Apart from a wide range of 'traditional' genres, I also played some pops, mostly J-pop, K-pop and Mandopop, and sometimes popular music from Thailand and Vietnam. Whenever I needed advice on J-pop and Mandopop, May was always the person I would speak to.

It was through May that I came to know some interesting pieces. 'True Colors' (yes, Cyndi Lauper's classic) covered by Hajime Chitose (元 ちとせ) in her EP A Thousand Nights And A Thousand Days (千の夜と千の昼 Sen no yoru to sen no hiru) is and example and one of my favourites.

Hailing from Amami Oshima (奄美大島), Hajime sings in a style with distinctive falsetto effects characteristic of that region, which can be easily observed in her interpretation of 'True Colors'. Click through and listen to this unique covered version by Hajime Chitose.

In return for May's contribution to my programme, I recommended to her good vocal works I encountered over the Internet from time to time as well. I especially remember a Mandarin piece called 'Say Forever' by the then GoGo & MeMe (哥哥妹妹), a pair of brother and sister now renamed JS (Justin+Sophia).

'Say Forever' is a soliloquy of a forlorn person who sings on a snowy street while thinking of her past love, imagining he is touched by the voice and she is hugged tightly in his arms. In her view, being alone would not make her lonely, but missing him would make her lonesome.

Perhaps because of the snow in lyrics, it became a ritual for us to listen to 'Say Forever' at Christmas, although we first heard this song in March 2006, obviously long before the festive season.

There are still ten months until Christmas, but I upload it to my new iPod Classic, which Fanne bought for me on a business trip to Australia when Australian Dollar hit five-year low, and play it repeatedly.

I was invited to a party hosted by MSN Taiwan to celebrate its tenth anniversary in Taiwan. What a pleasure it was to meet JS there in person. However, except 'Say Forever', I've never heard any other work of JS. I will check out more of their new works and attend their gig in April.
Posted by Wei at 16:21