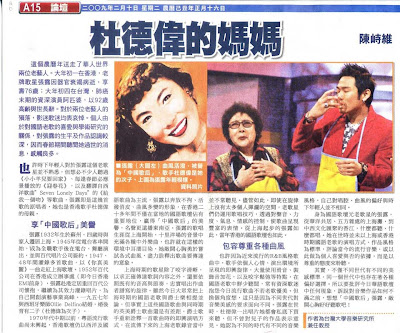 Urged by Allen, Fanne's brother-in-law, I submitted to Apple Daily (蘋果日報 Pingguo ribao) an article about Chang Loo (張露), a legendary Chinese singer who launched her singing career after making her recording debut for EMI (China) in 1941 and had been active in Hong Kong from 1952 when she resettled there until the mid 1970s. Chang passed away on the Chinese New Year's Day.

Chang Loo sang in a few languages, including Mandarin, English and Japanese, and had been capturing the fascination of the Chinese audience with her vivacious and versatile numbers for decades. She also covered many Japanese and English hits throughout her singing career in Hong Kong, among which was the classic 'Give Me A Kiss' (給我一個吻 Gei wo yige wen), adapted from Georgia Gibbs & The Yale Brothers' 1953 hit 'Seven Lonely Days'.

Had it not been for Allen, I wouldn't have written such an item for a newspaper. I suppose it would be vital for me to produce more academic papers rather than contribute articles to the press, since nowadays main measures of research performance are academic publications and citations, no matter whether the measurement is accurate and fair.

However, with respect to financial rewards and self-promotion, it might be worthwhile to spend a couple of hours in draughting a short article and have it published in a newspaper which circulates throughout the whole country.

Apple Daily, a national paper in the broadsheet format printed in Taiwan but owned by the Hong Kong-based Next Media Limited which publishes Apple Daily in Hong Kong, is usually perceived as a tabloid. Even though Apple Daily tends to be dominated by striking headlines, sensational stories and photographs, it gives commentaries on current issues and useful consumer information as well. It has the largest circulation, over 500,000 copies per day, among all newspapers in Taiwan.

It may not be as exciting as it was in 2005 when my first-ever research paper was published in Popular Music, a peer-reviewed academic journal dedicated to research on popular music, but it feels good.

For readers who do not read Chinese, please just listen to Chang Loo's 'Give Me A Kiss', and if you are interested, click through for the original English version of 'Seven Lonely Days' and make a comparison of the singing styles and instrumental arrangements.

To Henry: I noticed the Cow Parade exhibition in Taipei, but somehow I'm not really much into it. Thanks for those nice photos.

To Allen: I should invite you a drink for your advice, when I receive the payment from Apple Daily next month. It's quite lucrative, and reportedly the highest rate in Taiwan.