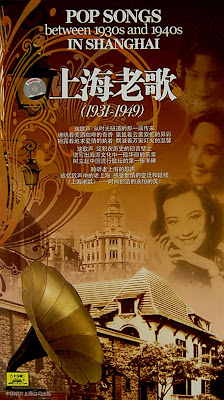 With May and her colleague's kindly help, I got a set and had it shipped from Beijing two weeks ago.

So what are Shanghai oldies?

Beginning in the early 1930s, Western musicians and Chinese songwriters and singers from different cultures and varied backgrounds came together to create the kind of music style that was later to be known as Shanghai popular song.

The first popular song 'Drizzle' (毛毛雨 Maomaoyu), written by Li Jinhui (黎錦暉) in 1927, was just a tune based on simple folk style melodies with four verses of words in vulgar expression of love and accompanied by a band using Western instruments.

However, in the ensuing two decades, diverse musical and lyrical elements were integrated into Shanghai popular songs and made them sophisticated in respects of elaborated lines and more materials in melodies, well-structured verses and exquisite words in lyrics, and enriched sounds and varied rhythms in instrumentation.

The close cooperation among those different groups of people and the vast and brilliant production they left behind suggest the beginnings of Chinese popular music in modern times. The elegant lyrics and charming melodies still today elicit gasps of admiration and praise.

Regrettably, after the advent of the Chinese Communist regime, those songs were gradually banned and inexorably denounced as decadent, pornographic music.

Then they suddenly became something to do with national security in 2008. The CDs I bought were returned to May's colleague because they didn't pass security check – they were deemed to be national security intelligence. Fortunately, another colleague is coming back to Taiwan by the end of September and will bring them back.

I suppose because the songs are so decadent and pornographic that they must not be revealed outside the country.
Posted by Wei at 13:09