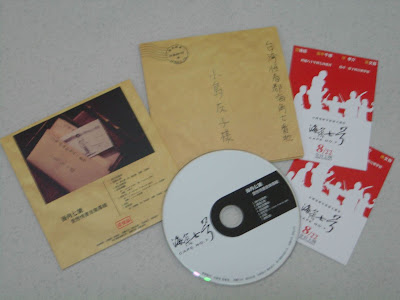 I don't think I've ever been a serious admirer of any celebrity or a zealous supporter of any film, fiction or so. However, for some unknown reason, this summer I became a fan.

On 12th August, thanks to Davide, I had the opportunity of attending the 10th-death-anniversary concert in memory of the late lyricist Yap Chun-Lin (葉俊麟), who reportedly wrote thousands of Taiwanese pop songs.

For the first time in my life, I dashed to the backstage to ask for autographs after the concert, just like a teen groupie. Most of the performers at the concert were not sexy young idols, but rather senior signers who had been active a couple of decades ago. Despite their elderliness and my maturity, I talked to them like a teenager standing in front of superstars, timidly, tremblingly and stutteringly.

I thought this would be the first and only celebrity worship experience, because although I have a soft spot for Japanese nymphs such as Morning Musume (môningu musum モーニング娘) and AKB48, as well as Taiwanese babes from a TV show on Channel [V] Taiwan, Blackies (wo ai heisehui 我愛黑澀會), I'm not so obsessed as to snap up all their albums, follow all their concert tours or engage in all sorts of events.

Quite the contrary, in some way, it seems to be the beginning.

Next to chasing stars for autographs, I switched to supporting the domestic smash Cape No. 7, again, like a young groupie, by visiting its official website everyday, taking part in Internet forums and reading personal blogs of the leading actors and actress.

As there will be no commercial release of the original sound track and limited not-for-sale CDs are only given away with tickets booked online, those who want to listen again to screen songs, voice-over monologues and music have to scramble to place orders on the exclusive booking agent's website during a specific period of time before the advance tickets and complementary CDs sell out.

I wouldn't be bothered to pay so much attention to a film a week ago. Even though I have watched The Godfather Trilogy and Casablanca for countless times, I've never bought, except for DVDs, any posters and collectible items, study painstakingly the plots and fun stuff such as trivia, goofs and quotes, or set associated wallpaper images and screensavers on my laptop.

However, I bided my time over the whole of Monday afternoon until at 5.00 pm sharp, the moment the online sale for this particular date started on books.com.tw (博客來). I secured a set of two tickets and CDs—tickets for Fanne and myself to watch the film again, one CD for May in return for her kind invitation and the other for myself to be my first cinema collectible.

The complementary CD may be open to offers on popular auction sites, or perhaps it is so popular that a record company will be interested in a commercial release, but these possibilities simply cannot compete with the great pleasure I found in supporting a film like a real fan.
Posted by Wei at 15:00