NTD 200: not enough to fly to Central Asia 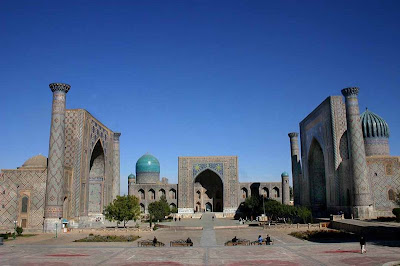 Musical cultures in Central Asia was just a topic in the course I offered at two universities, but after delivering the lectures I found myself so profoundly in love with both classical and folk music in this region that I just kept listening to all the recordings over and over again and reading even more books about the region's history and recent developments.

What captivates me is the coexistence of the court-derived classical repertoire featuring maqam-based music in the Persianate Muslim realm and the folk tradition of epic-singing and instrumental narratives in the Turko-Mongol nomadic realm. I have been absorbed by the raspy, guttural voices depicting the foregone heroic world in the steppes, as well as by the luxuriant ornamentation and emotional tension along the gradually ascending melodic lines in classical instrumental pieces or Sufi-inspired art songs.

The more I read and listen, the more eager I am to fly to Central Asia, either to Almaty, the biggest city in Kazakhstan, or to Tashkent, Sarmarkand or Bukhara, three important ancient cities in Uzbekistan. However, Fanne commented that she would not stop me from building my Kazakh or Uzbek castle in the air.

Last weekend, shocked at seeing me top up only NTD 100 (roughly just over USD 3) to my Easycard because I didn't have any more banknotes in my wallet, she offered to 'donate' 1,000 to ease my financial problems. I politely turned her down but finally accepted 200.

According to World Bank, Uzbekistan's GNI per capita PPP (gross national income taken into consideration purchasing power of currencies and real price levels between countries) in 2006 is USD 2,190 and Kazakhstan's USD 8,700, both far below Taiwan's USD 30, 084. It seems that staying in Central Asia wouldn't cost a lot, but undoubtedly it requires much much more than NTD 200 to fly there.

I'll keep laying bricks and blocks on my Central Asian castle.
Posted by Wei at 00:20