(Be patient, wait until the third contestant starts playing the traditional instrument to accompany his freestyle and see how fancy SuperStar KZ is)

Either looking for a change or jumping on the bandwagon after the blue camp won their parliament election, Taiwanese people elected Ma Ying-jeou, of KMT, the new president. Although disappointed by the result (I'm definitely not a fundamentalist green supporter but I'm still on the green side), the sentiments of letdown didn't really last long as I had been immersing myself in Central Asian pop music.

By Central Asia I mean the five new independent countries of the former Soviet Union, Kazakhstan, Kyrgyzstan, Uzbekistna, Tajikistan and Turkmenistan, while considering broadly the cultures, histories and languages in this roughly defined region, UNESCO expands it further to include Mongolia, Tuva, Xinjiang (a Chinese province), Tibet, Afghanistan, Pakistan and part of Iran.

I have been preparing a lecture on music from Central Asia to be delivered to students at NTU, a subject not covered in the course World Music I offered at NTUE last semester and thus requiring meticulous work from scratch. Rather than dealing only with 'traditional', 'folk' or 'classical' genres, I'm very much keen on integrating into the course recent development of the music industry, particularly the so-called 'pop' in this region.

Therefore, I've spent much time poring over books, journals and trade magazines as well as searching for audio-vidual products over the Internet. Because compared with Algerian raï, Nigerian jùjú, Bollywood dance or Persian pop, popular music in these five post-Soviet republics is much less known to audiences in the international market, in addition to Amazon, iTunes Store, Play.com and some other mainstream online music shops, I had to 'google' in order to discover special distributers.

In the course of the music quest, I found a marvellous compilation album and an interesting fact, both of which had been there for a while but I didn't realise until recently. There is actually a very active pop market in Central Asia. 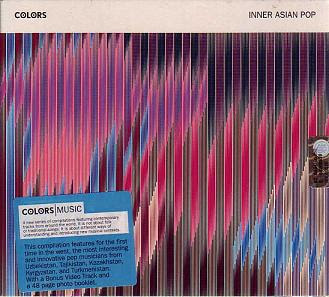 Following its successful Colors Magazine, the renowned clothing brand Benetton launched an audio CD series Colors Music with a view to introducing to a wider audience musics from unexplored corners around the globe. The latest in this series, Inner Asian Pop, is a compilation of pop songs from the above mentioned five post-Soviet republics. Visit Colors Music to know more about this album and this online shop to listen to sound samples.

I ordered this album without any hesitation and then on YouTube bumped into a video clip of the audition for SuperStar KZ, the Kazakh version of Pop Idol. This show has so far broadcast fourth seasons. Obviously, the fact is that, beyond our sight, the grassland in the heart of Asia has long been percolate with excitement of the Idol-style talent contest.

Generally speaking, 'traditional' music from Central Asian is characterised by its blending of the Persianate-Islamic classical tradition and the Turko-Mongol nomadic folklore. Although in Central Asian pop we sometimes hear instrumentation, rhythmic pulsation and singing styles resembling Anglo-American popular music, there is still images of maqamat (Middle Eastern melodic patterns) and reverberation of epic singing from steppes.

While Ma's campaign successfully turn Taiwan's presidency from green to blue, I hope these new aural and visual experiences will divert students from the mainstream pop, be it Anglo-American, Japanese, Korea or so, to pop of this unexplored region.
Posted by Wei at 23:02