From flying a microwave to driving a piano 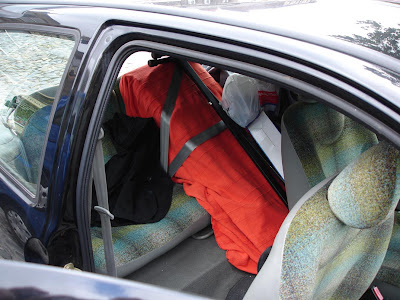 This is definitely neither a fresh corpse nor a desiccated mummy, but a discontinued Yamaha PF80 (33.5-kg electronic piano equipped with 88 properly weighted resin keys) carefully wrapped in a bed cover and securely loaded in a tiny Renault Twingo.

This photo reached me this morning. It was taken on the 24th of June, the day after my wedding in Stirling, before my best man Yung-Yao, together with guests Arnaud and Livia, started a long journey back to Cambridge. Actually, what is not seen in the photo is a microwave oven, which had just ended its four-and-half-year sojourn in Stirling and was about to return to Cambridge.

I still remember that on 20 January 2003, how this microwave flew Ryan Air with me all the way from Stansted Airport to take its long stay in Scotland. Rather than an item of checked luggage, it was actually treated as an embodied soul and allowed to occupy a seat.

Both frequent flyers and holiday makers should have noticed that since the 9/11 Incident, airport security procedures have become stricter, and sometimes so annoying and trying that it seems to take longer to pass the security point than to acquire a visa to visit the Moon. In all British airports, each passenger is allowed to take only one item of hand baggage through security control with a maximum size of 56cm x 45cm x 25cm. Thus, I guess, those who attempt to board a plane with a microwave today will be considered either absurdly insensible or harebrained.

However, believe it or not, on 20 January 2003, I was asked to bring a microwave into the cabin on my way back to Stirling from library and archive study in London.

Yung-Yao kindly lent me his spare microwave on condition that I took it by myself back to Stirling. Nevertheless, he helped me to transport this heavy machine by his bicycle to the station so that I managed to catch the train to Stansted.

At the check-in counter, scarcely had I queried whether the ground staff could take care of my microwave when a member of the check-in staff declared that the budget airlines Ryan Air could not take any responsibility should this unusual checked-in item be damaged and advised that I might want to take it to the cabin. Confused about the situation, I still walked to the security point with the microwave embraced in my arms, as well as a small rucksack on my back.

I would never forget the faces of the security staff. They probably couldn't figure out what the point was to take such a clumsy metal box when travelling by plane. However, it was true that I had the bona-fide permission to, and actually was required to, board with this bloody hefty hand baggage. Hesitating if they should let me go through the search point, a member phoned the check-in counter to make sure I wasn't stretching the truth. Finally, blessed with their non-stopping chortles and twitches of facial muscles, after the microwave was scanned, I proceeded to the boarding gate with it.

Stopped again before the plane by a member of the cabin crew, I repeated the story and explained what I was asked to do. Of course, a conversation went through the intercom between the cabin and ground staff and it proved that I was totally sane. However, I still heard not only gleeful giggles from the speaker of the intercom but also intermittent sniggers from those flight attendants wracking the whole aircraft. I was advised not to load this radiation-generating machine up to the overhead luggage compartment but, as the plane was not full, place it on the seat next to myself and fasten the belt for it.

In the end, the microwave successfully flew Ryan Air, travelled across the border, landed in Glasgow Prestwick and started its four-and-half-year term of service in Stirling thereafter.

I'm so glad the microwave has returned to its hometown in Cambridge, unexpectedly with a partner, the Yamaha electronic piano. After all, I gather it's the best way to send it back. I don't think Dr Lin Yung-Yao would run the risk of being regarded as a dumbhead because of an attempt to carry a microwave oven on board a plane. 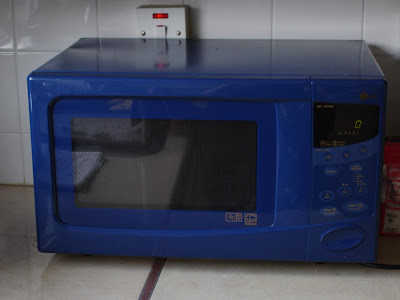