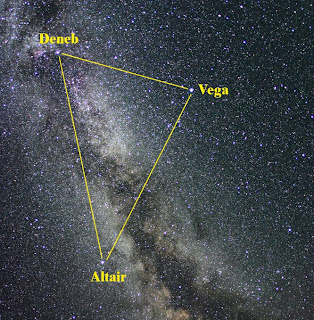 Last Sunday was Qixi (七夕, literally 'the seventh night'), or roughly the Chinese version of St. Valentine's Day. This traditional festival falls on the seventh day of the seventh lunar month of the Chinese calendar, which is the 19th of August this year.

Unlike Western St. Valentine's Day, which is arguably associated with two Christian martyrs, both named Valentine and honoured on the 14th of February, or may have its origin in Lupercalia, an ancient Roman fertility festival, behind Qixi is a love story.

The two protagonists are Niulang (牛郎, 'cowherd boy'), an ordinary mortal, and Zhinü (織女, 'weaver girl'), the youngest of the seven fairy sisters from the Heaven. There may be several variations of the story, but the ending is always the same. The fairy weaver was ordained to return to the Heaven and only allowed to reunite with the human cowherd once a year on Qixi. On this special day all magpies will fly into the sky and form the so-called 'bridge of magpies' (鵲橋, queqiao) so that the two lovers can cross and meet over the Milky Way.

Chinese people are reminded in late summer that the cowherd boy and the weaver girl are reunited when they see in the sky both eponymous stars Niulang (Altair, the brightest star in the Western constellation Aquila) and Zhinü (Vega, the brightest in Lyra), together with Tianjin si (天津四, 'Heaven Ford 4', corresponding to Deneb, the brightest in Cygnus) over which the bridge stretches. These three stars conincidentally form the famous summer triangle in Western astonomy.

When working on my PhD thesis in Scotland, I sometimes associated Fanne and myself with the poor Niulang and Zhinü. Except for the first year during which we lived together in Stirling, throughout the course of my doctoral study, we were usually separated by two continents and some waters and spent most of our time apart. Between October 2003, when we returned to Taiwan after she submitted her master dissertation, and July 2007, when she came over for our wedding and my graduation, we had only seen each other for four times, which were:Anyhow, so far it's not too bad compared with the annual reunion of Niulang and Zhinü. I have no idea where I'll end up and whether I have to leave again for overseas academic employment opportunities, but I'm sure Fanne is definitely not certain fairy, or an alien or so, and will surely never be ordained to return to another planet.
Posted by Wei at 18:17