I'm going to get married 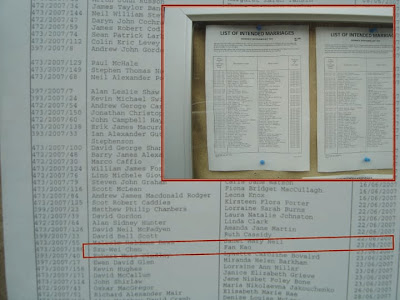 It is required by the Scottish Marriage Law that both of us have to complete and submit marriage notices to the local registrar no later than 15 days before the date of the marriage. The registrar will issued a marriage schedule and no marriage can proceed without it. A minister will face six months in jail together with a fine of £5,000 if he officiates our wedding in the church without the schedule.

As I am neither a British nor a European citizen but subject to immigration control, when giving the marriage notice, I have to submit a Certificate of Approval for Marriage in the UK issued by the Home Office. We almost cancelled the wedding at one point because there was a 'catch-22' situation.

The Home Office demanded to see my fiancée's 'visitor for marriage' visa so that they could grant me the Certificate, but the British Trade & Culture Office in Taipei asked for the Certificate so that they could issue my fiancée the visa. Fortunately, having fought against the British red tape of bureaucracy for almost three months and obtained help from Stirling MP Anne McGuire, my fiancée got her visa and I managed to get the bloody certificate, which cost me £295.

Now that the local registrar in Stirling have accepted our wedding notices and announced out intended marriage on the notice board, we will definitely be able to get married in the six-hundred-year-old Church of the Holy Rude as planned and no one should interfere with it.

We'll definitely get married!
Posted by Wei at 00:27

100 billion congratulations from me! I am so happy that finally you are getting married. One of my friends is also getting married next month after more than 10 years of dating. I think now I do believe in marriage since people seem to believe that marriage means something even they already have almost similar relationship of that of married couples. Hope someday I can find someone to marry me, too!