Recollect Paris on the silver screen 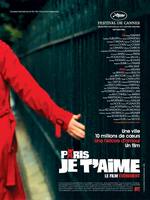 Having not watched a film on a real silver screen in Taipei for ages, I went to Vieshow Cinemas, a chain of multiplex cinemas which, if my memory serves me, used to be Warner Village Cinemas operated by the American-based Warner Brothers but was somehow sold to another entertainment group while I was away in Scotland.

Since I had heard of good comments on Paris, Je T’aime from friends and positive reviews of it from several websites before I came back, and by chance this film was still showing, I decided to spend a night for it.

So true are what those friends and critics said. Paris, Je T’aime is indeed a tour-de-force that triumphs where some other collaged films founder. It shows us that Paris, a city whose beauty, history and culture few places in the world match, can not only inspire French virtuoso directors like Francois Truffaut but can also fill directors from different lands with passion and enkindle their imagination of love to construct their own images of the city.

The two-hour Paris, Je T’aime is composed of eighteen short films, each of which is about five minutes long, shot in different arrondissement in Paris, written and directed by a different person, and played by a different set of actors or actresses.

This film reminded me of the week I spent in Paris in 2001 just three months after I left national service. As the eighteen shorts ran one after another, beauty and filth of the city, amiability and arrogance of the people, tranquility and cacophony in the air, serendipity and frustration during my short stay, and love and hatred in this life were all released from the deep chasm in the curst of my concealed memory.

Out of these eighteen short episodes, my favourite is Wes Craven’s Père-Lachaise, where a British couple bickered over their relationship while visiting Oscar Wilde's grave at a cemetery but finally their impending marriage was saved by the phantom of Oscar Wilde. Indeed, how dull would love be should your so-called earth partner, soul companion only do whatever pleases you and never quarrel over any single petty or significant matter with you!

I haven't got any opportunity to visit Paris again in the last five and half years though I did go to the Continent on several occasions. I miss the grandiose Arc de Triomphe as much as a romantic glimpse of any nameless street corner café. I don't know if I would love Paris as much as I love some cities in the British Ilses; nevertheless, I like the ambience.

What a night! fourteen months later, I came back to Taipei from Scotland to recollect a long forgotten vista in the course of my life.
Posted by Wei at 15:57