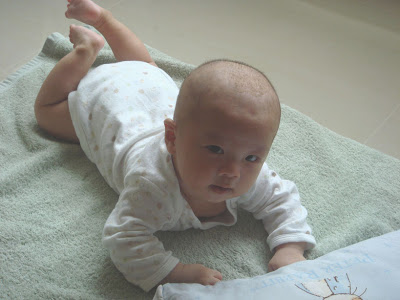 There must have been something wrong with the camera, or probably with the light, room temperature, relative humidity, air pressure, et cetera, et cetera. How could my son, who is four and a half months old, look into the lens with such a sinister expression on his face.

Compared with the one below, this is definitely wicked! 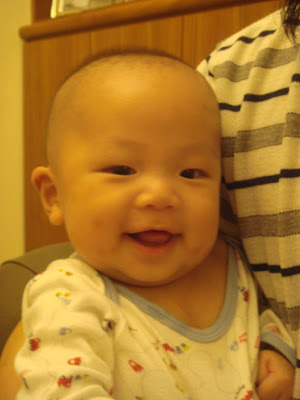 I was told by relatives and friends with children that babies may show their first hints of smile, as a reaction to another person rather than reflex from gas, as early as five weeks, but it becomes more regular by twelve weeks. By six months, most babies would smile at people they know best.

I wonder when a baby starts giving a grudging expression to show disapproval or reluctance, out of will rather than physical needs such as hunger or discomfort.
Posted by Wei at 13:17