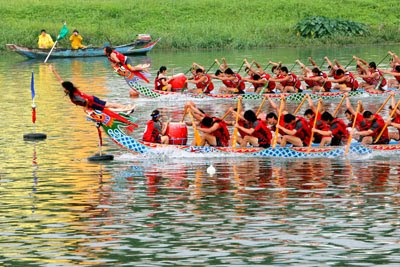 Yesterday was the fifth day of the fifth month of the lunar calendar—Dragon Boat Festival, or Duanwu Festival 端午節 known in most Chinese-speaking societies.

When I was a boy and when there were only three state-controlled terrestrial TV channels (TTV, CTV and CTS), on Dragon Festival my family and I usually watched the live telecast of dragon boat races. We would switch channels all the times in order to avoid adverts and try to watch as much as possible the live singing show staged just on the bank of the river where a boat race was held, which was usually organised by the TV channel that telecast the race.

However, it seems that few people would watch this sort of live broadcast dragon boat race and singing performance because I saw no programme, even a recorded broadcast, of any dragon boat races yesterday on any of the channels (either cable or wireless services ) available nowadays in Taiwan.

Therefore it is not profitable for a TV channel to produce a live broadcast of a dragon boat race along with a live singing show and we shall see no more telecast dragon boat races on TV.
Posted by Wei at 18:26