Flowers received at a concert 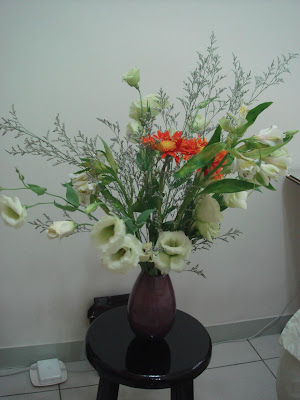 It is quite usual, and might just be as normal as blowing a kiss to someone you adore, to present a bouquet to your favourite musician, singer or artist at the end of a concert. It is also common to see a star tossing back to members of the audience the flowers which have just been presented on stage.

However, it would be unusual to be handed a bunch of flowers from the musician or artist after a concert. It happened to me last night.

I was invited to a trombone recital, one of those many graduation recitals I have mentioned in the previous post. At the end of the concert, the student gave an informal address in acknowledgement of support and guidance she had received during her study and went through with a list of persons and names to whom she owed gratitude. Surprisingly, I was also on the list because, in her words, I had brought her 'other musics' from the world in addition to the Western classical tradition.

The student presented me with a bunch of flowers in the aisle in front of the stage after the concert on my way out of the hall. Fanne arranged them in a vase.
Posted by Wei at 13:36