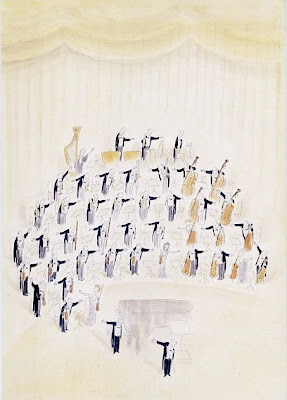 About 12 years ago, when I was still a postgraduate student at NTU, I was once intrigued by a picture titled L'ensemble instruemntal Paul Poulignot by the French cartoonist Jean-Jacques Sempé. Despite the small number of musicians and incorrect instrumental combination, I believe this picture to be a representation of an 'orchestra' which has just delivered Maurice Ravel's famous one-movement orchestral piece Boléro.

In this work, the snare drum has to tapped out the unchanging rigid ostinato (as illustrated below), while maintaining the rhythmic pattern and creating a steady crescendo, throughout the whole piece for about fifteen minutes. Therefore, at the end of the performance a special compliment from the conductor and a thundering ovation from the audience are usually given to the percussionist who plays it.

(The snare drum ostinato in Boléro )

I saw a framed poster of this picture at a bookshop but couldn't afford it. Fanne bought it in secret and made it my 23rd birthday gift in 1998.

Several years later, I was fascinated by another picture titled Orchestra, painted by another French cartoonist Jean-Jacques Loup (by coincidence, another Jean-Jacques). In this one, it is neither the percussionist nor any other member in the orchestra that is featured, but rather, a locksmith working on the grand piano while the orchestra, the choir and the organist are waiting on stage. 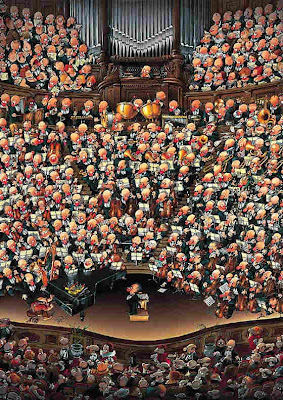 While I can find a touch of Boléro in Sempé's cartoon, I have no idea what is to be played on stage in Loup's picture. All I want is a poster but somehow this picture is only available in jigsaw, and a not-for-sale free poster only comes within every pack of jigsaw purchased. I have been hesitating whether I should spend 50 USD for a 2,000-piece jigsaw puzzle just for the complimentary poster.

I gave in last weekend. I'll just frame Loup's Orchestra and hang it beside Sempé's L'ensemble Instruemntal for the time being, and think about how to deal with the jigsaw in the far future.
Posted by Wei at 17:50