In memory of my late grandpa

I had been waiting for winter since last Christmas. As in Taipei it didn't fall below 10 °C until 10 January 2009, I suppose winter only came after the Gregorian New Year. I was happy to be greeted by the chilly wind blowing down streets and the wintry blast howling over the campus.

However, if only winter hadn't arrived.

My grandpa fell asleep at night on 12 January and didn't wake up, which probably had to do with the sudden drop in temperature. Grandpa passed away peacefully in bed at the age of 91 just before the Chinese New Year. For the first time in my whole life, I made a complaint about the low temp. If only winter hadn't arrived this year, he would live longer to see Wei II or Fanne II next year or the year after.

Grandpa was cremated on 21 January after a memorial service attended by more than 70 family members. He has seen his family grow and prosper, and his children and grandchildren achieve in many aspects of life, and thus in Taiwanese terms, he should be pleased to breathe his last without regrets.

Contemplating his image in the photo during Chinese New Year, I think of Grandpa profoundly. 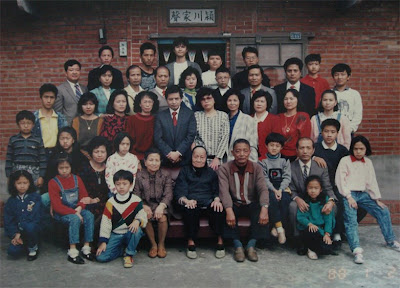 It was taken on my late great grandmother's ninetieth birthday in 1988, when I was only 13. Forty family members in total were present here, excluding those from my granduncle's, and from left to right at the centre of the front row were my late grannie, great grannie and grandpa.
Posted by Wei at 18:07

Hi Wei, sorry to read about your grandfather's passing. Thanks for sharing the lovely family photograph. That's pretty impressive.

I'm so sorry to hear of your grandfather's passing. It's never easy losing someone we love but there is I hope comfort in knowing there are still so many to remember him and keep his spirit alive. Take care, Nicki.

Dear folks, my heartfelt thanks for your condolence.