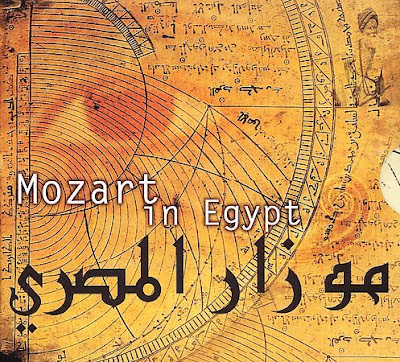 (Excerpt from 'Lamma Bada Yatathanna/ Symphony No. 40'. This 50-second clip is only intended as demonstration, not meant to infringe copyright.)

A couple of weeks ago I found Mozart In Egypt, a 1997 Virgin Classics album, created by the French musician Hughes De Courson, fusing Mozart's classical work and Arabic tradition in Egypt into an interesting auditory compound.

The album gained a mixed reception.

Contributing to Customer Review on amazon.com, a doctoral student in composition from Oxford University argues that Mozart In Egypt is just an exquisite example of the omnipresent postmodern phenomenon, that is, 'blurred realities and imposed mixtures of different cultural aesthetics'.

In this reviewer's opinion, De Courson's intention to marry Western functional tonality and diatonic harmonies with Arabic extemporaneous ornamentation and linear flows based on the maqam system represents 'mass-produced and degraded trivialisations of true artistic and cultural statements'.

Contrastingly, on the same Customer Review page, a linguistics professor from Université Paris Panthéon Sorbonne acclaims the album as 'sound-senstional' and commented that Mozart's music is successfully blended with Egyptian music. Traditional Arab instruments offer those from the western classical tradition a new depth, and through the voice of the Orient 'Mozart's music is regenerated and ressuscitated out of its classic texture and harmony.'

I don't really want to comment on, or review, what I have heard. After all, an experimental or fusion album of this kind tends to elicit criticism, in which deprecators condemn the oversimplification and dumbing down of two musical cultures, as well as invites praise, in which advocates applaud for the merge of two different worlds and new aural experience it generates.

What captivates me in this album is the third track, which neatly brings together Mozart's 'Symphony No. 40' and 'When She Begins To Sway' (لما بدا يتثنى Lamma bada yatathanna), an old famous Arab song from Moorish Spain.

Listen to the audio excerpt above and pay close attention to how a European symphony turns into an Andalusian Muwashshah. It's entertaining.
Posted by Wei at 18:05