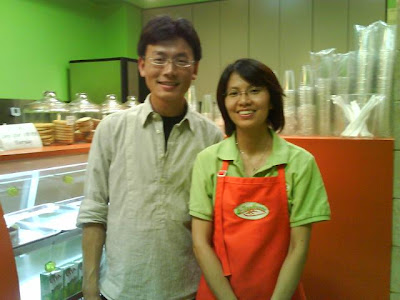 Readers of Principal Wei's Weblog may or may not know that Wei has a sister, who lives in New York, USA. After finishing her high school and college, she worked in a bank for two years. One might think that it is a good job for a girl, stable and good paid. Being the only sister of Wei, Li-Wen, however, has a greater dream – opening and branding a new teahouse in downtown Manhattan. Since I was staying in New York for a couple of weeks, I decided to visit her teahouse. Not until then did I realise that she started having this dream while she was studying in the college. During that time, she took a part-time job to work in a teahouse and support her expenses.

Within the years of her part-time employment in a teahouse, Li-Wen developed a business plan and would like to make it come true. She thought of the name of her teahouse, designed the interior decoration and even registered a domain name in order to advertise her teahouse on the Internet. Eventually, she gained support from her aunt and uncle to make sufficient start-up fund. She then quit her job and found a good location near the influential Wall Street.

On July 4th, I went to Li-Wen’s teahouse with my university classmate, Ho-Yi, who is working as an architect in New York. The address is 29 John Street, not far from the Fulton subway station. As Wei didn't disclose the secret of my visit, Li-Wen was very surprised to see me. The last time we met was on Principal and Fanne's wedding in Scotland about a year ago. I was the best man and she was bridesmaid. Li-Wen greeted us excitedly and introduced us all products of her teahouse. I ordered my all-time favourite: Pearl Milk Tea. I forgot what Ho-Yi ordered though.

After leaving Taiwan for so many years, my hope for drinking authentic Pearl Milk Tea in London China Town has gradually died down. I concluded that any characteristic food or drink once leaves its motherland will never be the same. I have to say, however, I might be wrong. After sipping Li-Wen's Pearl Milk tea, my taste buds were able to recall my memory of happiness. Nicely blended milk and tea, ice-cold, combined with 'pearls', which are dark and partly transparent jelly-like tapioca balls. Having these chewy 'pearls' in the mouth is a wonderfully pleasant sensation that goes so well with milk tea. Li-Wen offered us some rice crackers, not home made, yet very nice, too. We happily chatted and joked. She also told us bits and bobs about her less-than-two-month-old teahouse.

When was last time talking and joking happily with my friends and each of us had a cup of Pearl Milk Tea? Towards finishing my drink, I tasted a hint of nostalgia.

At this point, I believe many readers will have agreed with me – the brother and sister of the Chens are the same type. They are not afraid of making dreams because they share the same revolutionary elements in their blood. To congratulate them for having made big steps, I sincerely wish them all the best on their own paths. 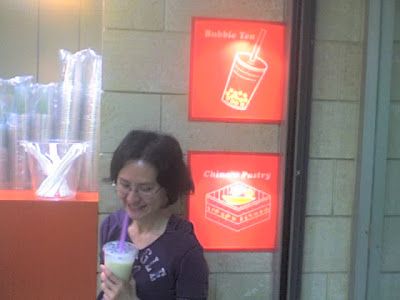 (Ho-Yi, classmate from Botany NTU, Class of 98, and, in her own words, a single girl seeking romance.)

Editor's note: Dr Yung-Yao Lin is currently a postdoctoral fellow in a research institute in Cambridge, UK. He is a long-term and passionate reader of Principal Wei's Weblog. He has appeared several times in many articles on Wei's blog. Since he has not a bolg of his own, he has decided to become a freelancer and contribute to Principal Wei's Weblog whenever appropriate.