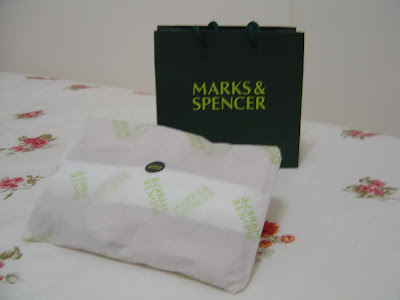 A Chinese saying goes, 'A foreign monk chants better (外來的和尚會唸經 wailai de heshang hui nianjing).' Another one says, 'The moon looks fuller in other countries (外國的月亮比較圓 waiguo de yueliang bijiao yuan).' Sometimes people do believe that things from a distant land are of higher quality than domestically made products. However, whether imported goods are better or not, they may need repackaging or image-modifying to fulfil native consumers' expectation one way or another.

The established British retailer Marks & Spencer launched its first outlet in Kaohsiung in May and then another two in Taipei in September. Although one of the Taipei outlets is just two blocks away from our flat, we didn't visit it until today. Having worked unflaggingly to collect audiovisual materials and prepare the 'World Music' lecture pack for quite a while, I managed to spare one Saturday afternoon to check it out with Fanne.

I regard M&S in the UK as a high-street-version TESCO, but it has a different image in Taiwan: an upmarket fashion outlet which also sells tea, biscuits and wine but no fresh food such as veggies and meat. While M&S in the UK only provides Britons with free plastic carrier bags both for clothes and for fresh food, M&S in Taiwan offers us fancy paper bags at no extra cost for whatever we purchase. They even fold every clothing item neatly and wrap it individually before putting it in the bag.

I doubt what Taiwanese customers would think if M&S were positioned just as a supermarket which sells expensive imported stuff which could only be taken away in plastic bags.

Truly amazed by their upgraded packaging in Taiwan, we decided to take a picture to show our friends in the UK how M&S is doing here.
Posted by Wei at 20:02